It’s been a while! (Well, a few weeks I suppose?). First and foremost, I hope everyone is doing alright. It is strange to fathom how long quarantine has been, and the adaptions that have had to be made to adjust to the current “normal”. There’s definitely a LOT going on right now in the world […]

Ready to give Sodo’s theme a listen? Well here you go! This tune has some very interesting development, and we definitely experimented some! Big Thanks to Tudd and Alan Gee for collaborating with this tune! Also, Happy Hyena Day! 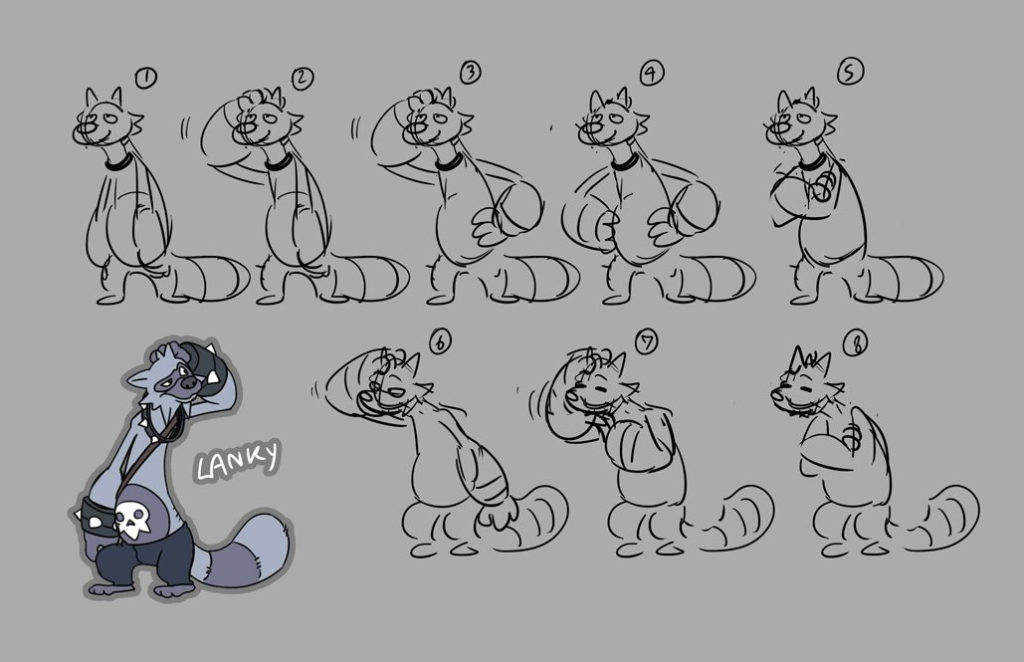 Meet Lanky Goon!   A Raggoon born from plastic and rubber pollution!  Elastic, annoyingly durable, and a bit difficult to get rid of!  Lanky is one of several Raggoons, representing one of many sources of particle matter, similar to Bomb Boy and Shorty!

Breeze: Great Adventure Above The Clouds!

Yeah… I’m pretty sure a lot of people on twitter were kinda hurt to find out that this was an April Fools joke, but I had a LOT of fun making it. The idea came up a month before April fools day, and we were quick to execute on it. A lot of inspiration came […]

Hey! I just realized that I can actually make audio posts, so if you haven’t already given it a listen, here’s a new Jam for you, Camo’s Theme “The Imposing Gentleman” by Tudd!

As many of you know, I was invited to attend TFF (Texas Furry Fiesta) this year and did a showing of some of the game’s current progress, as well as showcase some art and merch.  Quite honestly, this wasn’t in my plans at all for the year, but I’m glad to have been a part […]

“You all ready for another reveal? Well, about time they brought me up!” Meet Flood! Storm Supervisor of Floods. The Rough and Tough (wannabe) small fry, he’s over-eager for a chance to flood something. Flood used to be Rain’s assistant, until they fell out one day, resulting in Flood moving into the Storm division.  (Designed […]

Hey all!  For those who don’t know from Twitter, I’m actively working on a demo to present at TFF (Texas Furry Fiesta) after receiving an invite! We’ve been on a demo for close to a month now, and this final week will probably leave us pretty strained and drained (wait, do those mean the same […]

I haven’t done one of these in a while, but I’m also working on some things right now that would suck to spoil before it’s done, so I’ll try my best to provide something in this update. Piti is working on polishing up some of Breeze’s mobility animations, now that we’re getting comfortable with the […]

Hello guys!  Nearly halfway through January and my head is ready to explode due to the busy few weeks (both personal and Breeze related). Holidays, Kickstarter, some changes at my job, dental mishaps (still can’t feel my tongue, something called paraesthesia?), and Ring Fit…  Currently, I’m dealing with getting Kickstarter stuff,  like surveys, and handling […]